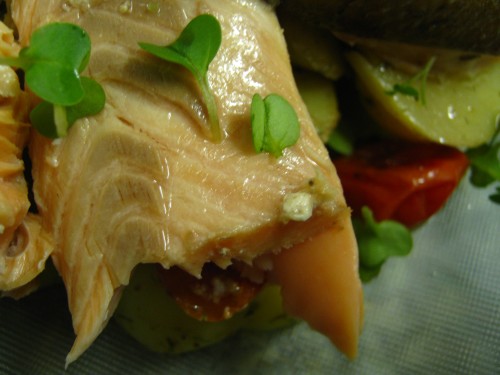 As promised, here is the recipe which was the final fate of the 3lb river trout (purchased for the bargain price of a tenner!) I picked up at Muswell Hill Farmer’s Market. I had personally never seen a trout of that size and was delighted with it. I was even more delighted because the fishmonger had been able to tell me which river it had been caught in(the Stour). It was extremely fresh, having been caught only the day before and of such good quality that I really didn’t want to do that much to it but instead to allow the fish be the star. 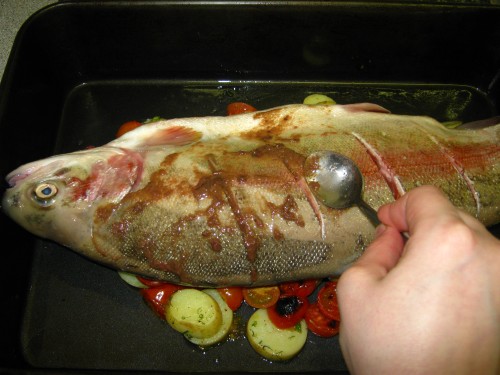 If you’re lucky enough to know someone whose into fishing and throws the spoils your way you might occasionally end up with a large fish on your hands – or indeed if you turn up to the last knockings of the farmer’s market and score a bargain like I did – you could apply this procedure to most types of fish.

1 lb cherry tomatoes, salted and lightly roasted or even grilled

Take a sharp knife and slash the skin of the river trout, about 3 or 4 slashes per side. Set aside while you deal with the anchovies, which you do by simply putting them in a pan and stirring over a medium heat until they break down completely.  Mix the steamed new potato slices, the chopped fennel tops and the lightly roasted cherry tomatoes and, in a large heavy gauge roasting tin, roughly make the shape of your fish with the mixture (season the mixture first, of course). Place the slashed fish on top of this potato/tomato pile and spoon over the melted anchovy.

Bake the fish at gas mark 5 for about twenty minutes. You can test to see if it’s done by inserting a sharp knife right at the fattest part of the fish and prizing the flesh apart. If it’s still translucent pop it back in for a few more minutes. When it’s done, lift it onto a cutting board and carve the fish up in exactly the same way you would a smaller one. Place the potato mixture onto a serving dish and then add the carved the fish pieces on top with a sprinkle of fresh herb and a few lime or lemon wedges. We had some home made garlic aoli too but you could knock up a creme fraiche based alternative in seconds if you’re pushed for time.