Have you ever roasted a cabbage? I started to do so a couple of years ago and have since experimented with different varieties. I’ve found that a naturally sweeter cabbage works best and of those the January King is, well …. king. There are people who might perhaps say “Roast cabbage? You can’t roast cabbage!” But of course, you can. You can roast anything you like – you can roast the curtains if you feel like it but I wouldn’t advise it. 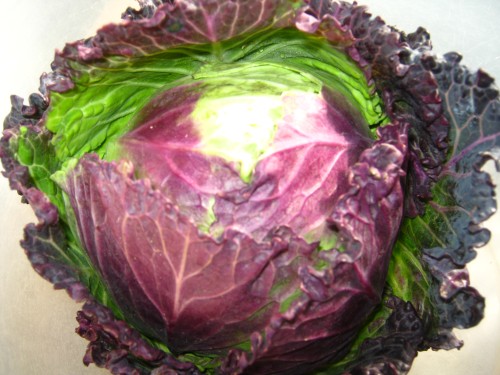 Roasting this vegetable which is more commonly cooked by steaming, boiling or sauteeing gives it a really interesting, nutty flavour. I suppose the effect is in some ways akin the the ‘seaweed’ often served in Chinese restaurants which we all know is in fact deep fried cabbage or spring greens. Only this dish is far less oily and visually very pleasing on the plate. It is an usual way to serve a vegetable that can be quite difficult to present (if you’re going for aesthetic pleasure as well as culinary). Cabbage is not often served in restaurants or at dinner parties perhaps for that very reason but this technique results in a vegetable dish that I would be very happy to serve to guests. 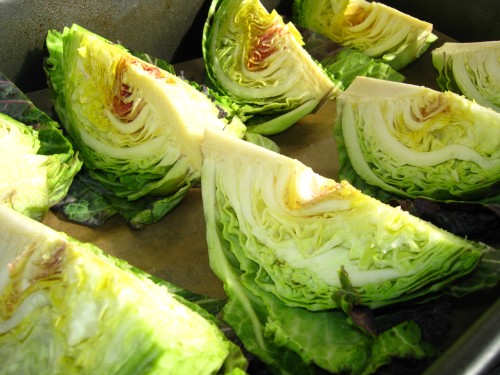 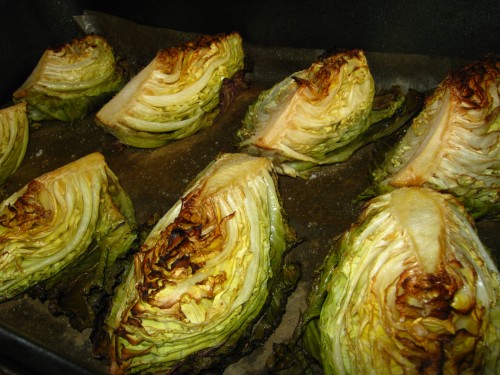 Making this dish could not be easier; cut each cabbage intp 8 equal wedges. Pop them in a bag with a few tablesppons of oil and some good salt and give them a gentle swoosh (technical term). The aim is to get them all evenly coated with oil and salt but to avoid breaking them up. Lay the the quarters, core side up, in a roasting tin. Leave the core in whilst roasting them and then slice it out to serve them. The core will hold the wedges together during the cooking process. Cook them on gas mark 4 for about 30 – 40 mins, keeping a close eye on them. If you do dutch white cabbage instead, for example, you will a) need to cook them for longer and b) turn the wedges on one side first and then the other for the latter half of the cooking process. This is because the cabbage is more dense in texture than a January King.